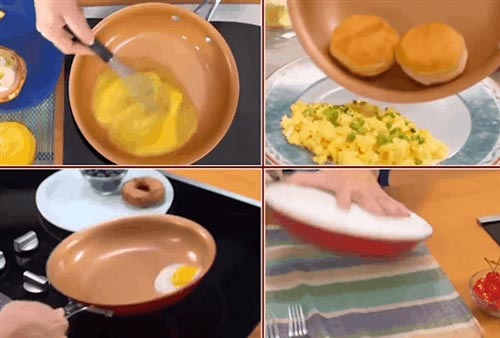 Hi, I’m Jennifer, and for some time I have heard a lot about dishes coated with the red copper. To be more specific, Red Copper Pan claims that it is very durable, that you do not need to use any oil or butter, and that it will remain scratch-free forever. Since the Web is dark and full of shadows, I have decided to try it out myself. Here is my list of reviewers which have used it, because I love to be certain before purchasing a product.

The first thing I have noticed about Olga is that she and I share a somewhat skeptical view when it comes to television based shopping. I have agreed with her that buying something this way is very troublesome and that you will get horrible customer service, and often you will pay for something which is not so good. Therefore, she recommends buying it online.

As for the pan itself, Olga tried several tests: an egg test (where an egg is prepared without oil or butter), making caramelized sugar in the pan, washing it in a dishwasher, and fork test (where she scratched the surface using a metal fork).

An egg test failed completely because the egg got stuck on the surface and got burned. So, preparing an egg as it is in a TV commercial is impossible. It will leave you only with a mess to clean.

However, the caramel test was a success, but the manufacturer claimed that you could clean the pan with a napkin after. Although this is the truth, and you can wipe it clean this way, there was a thin layer of sugar still stuck on the surface, and it was sticky to touch.

The manufacturer also states that the pan should be washed by hand, and dried with a towel, and this is the best course of action to undertake. She also noticed that several circles of washing might damage the surface, which is another reason for washing it as recommended.

The surface is not scratching resistant because there were marks left from scratching it with a fork. The chipping is also noticed, but it is unclear if this was made before or after she tested it.

Her conclusion is that this pan fulfills only one condition, being it is safe for use in ovens at 500 degrees. All other things which the manufacturer claims, are not valid.

The second review which I took into consideration, is an ad from FOX. Steve Noviello did a field test with a customer, and the results were a bit different.

The egg test was flawless. The baked egg just slid down the pan, without an issue. Now, this could be due to the preheated pan (if Olga did something without knowing). Perhaps in this video, the egg was put into a cold pan, and heated to baking temperature altogether.

The caramel test was also a success, and this was the same with Olga, so I believe that it is possible to make caramelized sugar without damaging the pan.

As for the scratch test, I have seen the traces of the fork, and now I firmly believe that it is not scratch resistant. I only don’t know how they didn’t scratch it with the mixer?

The reviewer took another step forward and drove an SUV over the pan. As one of the comments below the video said, I do not drive my car over my pans, so I don’t understand what the point of this durability test is. Perhaps to show the strength and durability of the product?

So far, this video had confirmed everything the manufacturer claims, but I can’t just push aside that “marketing and selling” tone of it.

With the thoughts so diametrically different, I needed a deciding vote. Luckily, James did just that. In the beginning, he confirmed my thoughts and said that some reviewers put the pan on high heat, and the food gets stuck.

He used the pan for 21 days, and as for the eggs, the pan stood for its reputation. What I liked with his tests the most, is that he didn’t try to put the pan to extreme condition. He used low heat, sprinkled some oil, and was careful in the washing process.

He also tried sausages and shrimps, which are a bit more demanding when it comes to preparing, and still, the pan endured.

In the end, on the 21st day, he again prepared eggs, and those yet again, came out very nice.

I have to point out that his pieces of advice are in general excellent because he just puts aside “those things you see on a commercial.” He does his best for a pan to last longer, and this attitude was fundamental to me.

To summarize all of the reviews, Red Copper Pan claims that you can be careless and throw whatever you desire to this pan, it will prevail. This is simply not true. The pan is very sensitive, it can be damaged, and it will be if you are careless. Washing it with a little bit of kitchen soap and using a paper towel is the best course of action.

Also, forget about high temperatures, this pan is designed for lower settings, and although this somewhat limits your choice of meals, it still does an excellent job. Its surface is non-stick, but you will have to add in some oil or butter. Frying without it is a recipe for disaster (pun intended).

As for utensils, avoid metal ones due to their low resistance to scratching, and opt for silicon or preferably wooden ones.

In the very end, this pan can be surprisingly good, only if you take good care of it. Do not try stunts from TV commercials, and you are sure to be happy with it.

Jennifer Wisehttps://hewise.com
This is Jennifer Wise. I have been working as a professional chef for the last twelve years. Initially, I started my journey as a home cook and started my graduation. I have completed my nutrition degree from a reputed college. Now, I am doing it professionally. Not only this, I joined a restaurant to gain practical knowledge about cooking. While working in restaurants, I experienced and learned many things in those years. Right now, I am running a small business, and we provide homemade food to our clients. Thus, I need to use lots of cookware sets, frying pans, pots, Omlet pans, and lids for my kitchen, and from my experience, I know which frying pan is suitable and which is terrible. Experimenting with fresh foods and creating a new kind of recipe is always fun. I have made lots of new recipes, which I will share here gradually. It is not hard for me to select quality kitchen products for the kitchen that fulfills your kitchen requirements and last longer than others. So, if you need any frying pan, pots, or Cookware-related information, you can ask me questions using the comment option or search the topic via our website search option. If you have any questions or want to know any information, then you can contact me here.
Share
Facebook
Twitter
Pinterest
WhatsApp
Linkedin
ReddIt
Previous articleBlack and Decker Air fryer Review
Next articlePower Air Fryer XL Review and Testing